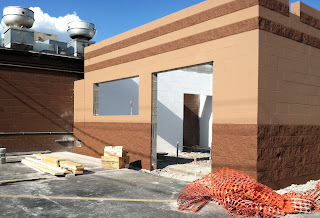 Marion's hometown pizza shrine Walt's Pizza is adding another topping to its eatery with a new delivery and carry-out center on the south side of their existing building.

Since 1977 owner Walter Nieds has sold more than 2 million pizzas from his store on South Court Street. The new addition will free up space in the kitchen and replace the somewhat cramped carry-out entrance in the front of the building.

Nieds applied for the building permit on Aug. 7 and construction began shortly thereafter.

The move is part of a larger trend of new eateries opening and older establishments expanding or renovating in town. The new ones being Logan's Roadhouse and Panera Break and those renovating over the last few years including McDonalds (new replacement building on Court, remodeled building at I-57) and Taco Bell.

And there's both additional restaurants looking at Marion as well as more remodeling/replacement of old buildings by existing ones.

Nieds' project at his location is also part of a developing trend of new investment along Court Street that's seen more than a million dollars of new construction underway or planned within about a five-block stretch of the highway, which besides the carryout facility includes a new Family Dollar store at the site of the old demolished Hardee's building, and a new office building for Clarida & Ziegler Engineering on North Court.

Around the corner on West Main Street the city continues planning work for a new multi-million dollar recreation and aquatics center at the old hospital site. The area is mostly all part of the recent Hub Tax Incrementing Financing District established by the city.

While most of the attention in Marion is directed to the area by the interstate traffic counts there in the heart of the city are 13,400 vehicles for Main Street west of Court (but that's 2006 figures), and 11,000 vehicles on the first couple of blocks of South Court and 12,500 vehicles on North Court, both as of 2011.

The creek that runs around and under the intersection of Court and Main was once named West End Creek as that was the western limits of development in Marion in the mid to late 19th Century.

The $180,000 restaurant addition is part of nearly $1.8 million in projects permitted by the city this month. Other major projects include the $500,000 building for a new Family Dollar store at the corner of West Main and Court Streets, and an $850,000 addition to be built onto Heartland Christian Church at 900 E. Boyton St.

Construction over the summer started out slow in Marion with just three building permits in June, but has been picking up. If last year's $3.9 million expansion of Heartland Medical Center is taken out of consideration, then totals for this May through August are above last year's.

In other business Monday the city council decided it was time to rename Circuit City Road in the Robert L. Butler Industrial Park now that the bankrupt company's former warehouse has sold to new owners. Presumably the road is deservingly named for Glenn Clarida, the city's long-time engineer and only surviving member of the city's mid 20th Century-era planning commission other than the mayor himself who was appointed to the commission before being elected mayor in 1963.

If not, then it's named for the mayor's father-in-law, J. H. Clarida, who served as the city's mayor during the riotous Prohibition Era of the 1920s. I'm going with the former rather than the latter.

Posted by Jon Musgrave at 5:30 PM No comments:

It's the second year for the festival organized by the Shawnee Classic Iron Auto Club and sponsored by the Saline County Tourism Bureau, Harrisburg Medical Center and Wallace Auto Parts.

My story in yesterday's Daily Register has the details.

The Fourth of July fireworks that were originally planned for this day have been moved again to the BBQ and Bluegrass Festival on the fairgrounds Oct. 6.
Posted by Jon Musgrave at 11:33 AM 2 comments:

The famed E'town River Restaurant in E'town (that's Elizabethtown for those who like to spell out long names) has doubled its capacity with a new floating addition.

News Three reporter Stephanie Tyrpak of WSIL-TV has the story from earlier this month. With the new addition owner Patrick Joyner can now offer another 44 seats and has had to add two additional employees.

It's located at 2403 Black Diamond Drive behind Sao's Asian Bistro and McAlister's Deli on Morgan Avenue.

Although it sits back off the highway more than most of its competitors, its four stories overshadow the restaurants in front of it and so is visible even from the Illinois Route 13/Halfway Road intersection.

The new hotel has 64 rooms. It takes the place of the former Comfort Inn off of Exit 53. That is now a Quality Inn. Both brands are part of the Choice Hotels International family.

It's the second new hotel to open in Marion this year. A new Holiday Inn Express opened in May. 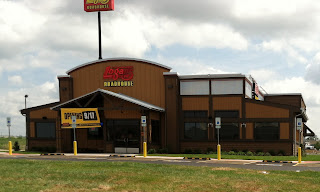 Down the street and round the bend construction work on Logan's Roadhouse is almost complete. The new restaurant is set to open Sept. 17, according to a sign out front.

The eatery will seat 180 guests which is a smaller model for the brand. In comparison O'Charley's in Marion sits 320.

It may be like Chili's in Carbondale which opened with a smaller venue and almost immediately added on to the facility. 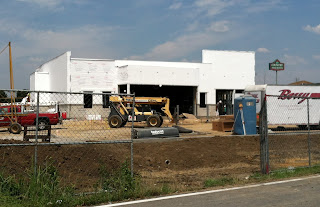 Meanwhile work on the new Panera Bread store shows that it was almost in the dry when I took this photo last week. It should be fully enclosed by the time Hurricane Isaac's rains mark an official end of the drought this weekend.

It's located around the corner again from Logan's Roadhouse on the frontage road along Route 13 in between Drury Inn and America's Best Inns. Panera broke ground for the restaurant last month.

There are still at least two major chain restaurants looking at Marion not counting whatever is looking at the Millennium Development site - Boulder Creek at Marion. One of them is seriously looking at the land immediately north of Logan's. It's been listed as pending on the multiple listing service since earlier this year.
Posted by Jon Musgrave at 8:20 PM No comments: Today's Daily Register includes my story on the upcoming closing of the Irish Inn near Ozark in Pope County. Owners Brian and Lynne McCreery say it's time to retire after 12 years in the innkeeping business.

As I note in the story just in the last few years the inn has not only been named the "Small Business of the Year locally by the SIC Small Business Development Center in Harrisburg, but has received national recognition as among the Top 14 'Most Romantic,' the Top 10 'Fido Friendly,' and the 'Most International B&B in North America' to just name a few."

Lynne remains a strong supporter of tourism in the region and had good recommendations for those who want to go into the lodging business.

Check out the story for more.
Posted by Jon Musgrave at 5:24 PM No comments:

The expansion and upgrade of the Benton Civic Center is taking longer than expected.

The new finish date is now projected for sometime in October compared to the original Sept. 1 date, according to a story in the Benton Evening News this week.

The project has been three years in the making. In the end the center will be bigger and better say officials allowing them to hold larger concerts and events.

Architect Brian Edmison said the state-of-the-art facility would include a 6,000-foot stage adding the stage would extend 36 feet beyond the former back wall.

“The roof will be 50 feet tall,” he said. “The only thing taller in Franklin County will be the Wood Building. That excludes towers and other structures. The height is needed to raise and lower scenery for theatrical productions.”

Edmison said two side sections would also be renovated to elevate the floor and install an orchestra pit 6 feet, 6 inches below the stage.

Click here for a slide show of the construction progress.
Posted by Jon Musgrave at 8:07 PM No comments: