Put down that maple syrup for your anticipated IHOP pancakes, Marion may be getting another two new restaurants and a strip mall on the west side according to a rumor that came from a source who heard it second hand, and who wasn't connected with the city, the real estate industry, the construction business, let alone the actual developers.

Now normally, I wouldn't run with something this thin, except that last Monday the land in question went from active to pending in the Egyptian Board of Realtors' multiple listing service used by local Realtors such as myself. (I'm associated with Paul Wilson Realty, LLC here in Marion.)

That means it's under contract and likely to close.

I've put a few calls around today and apparently something is coming separate from the IHOP deal announced last month. Today's calls also indicated a fourth restaurant may be in the works though no one in the know is talking about actual names.

I've heard a few names over the last few weeks, but never anything concrete, or supposedly connected with this proposed development.

The land in question is 6.06 acres of Wolohan property on the east side of Halfway Road and south of Morgan Avenue The Hill Drive. It's listed for just under $3.96 million, or $15/sq. ft. which has been the going rate for that stretch of Halfway Road. Whether that stays true will be interesting. Gander Mountain's recent acquisition only came to $7/sq. ft., although that appears to have been a discount in order to get new attention to the area behind Menards.

In comparison, the original developers of the Fairfield Inn have recently listed their vacant land to the north of that hotel and to the west of Rent One Park. They're asking just under $1.6 million for the 3.66-acre tract which comes to $10/sq. ft.

The reputed new developers apparently are not interested in Wolohan's remaining 1.7 acre outlot across the new Volunteer Drive access road to the east. That listing is still active, rather than pending. Also not known is whether the developers have approached the owners of Marion Chevrolet-Cadillac about their vacant 2.2 acres immediately north of their dealership and immediately east of the concrete pad where the old Wolohan's Lumber building used to stand. It's acquisition isn't necessary, but it would square up the property lines to a point and bring the total land in play to just over 8 acres.

The land now pending would have access to Halfway Road on the west, The Hill Drive (formerly Morgan Avenue) to the north and Volunteer Drive, the new access road built last year to the east.

A few years ago Denny's had optioned the corner of Morgan and Halfway, but never closed on the deal.

Meanwhile as we wait on these developments we do know of one new restaurant that's definitely coming to Marion. It's a new Chinese eatery at the corner of Court and Boulevard across the street from Taco John's. It will be the seventh restaurant on Court.

Construction has been ongoing for the last few months and the parking lot is almost completely paved. No word yet on an opening date.

Down the street, A 'Lill' Taste of Cuba has switched up its menu and is now known as Ray's Cafe specializing in breakfast and lunch. According to their Facebook page, owner Loray Lill changed the name in January because of an upcoming move. Her brother is the new owner, hence the new name. They're still offering "the same authentic Cuban cuisine, gyros, Philly's, pastas, salads, sandwiches," but have added breakfasts. The new hours are 7 a.m. to 2 p.m. Monday through Friday, 9 a.m. to 2 p.m. Saturday with breakfast served all day.

Back on the west side of town Sonic took out a building permit late last month for a $400,000 expansion and renovation to its existing location on Walton Way.

On the negative side of the economic development equation the Illinois Centre Mall continues to shed stores under the current slate of owners. Locally owned The Country Porch/Country Gourmet is closing its door at the end of the month with Sisters Three next door planning to follow. In addition the corporate chain of Deb Shops are closing all their stores, including the one in the Marion mall.

Vigiano's II Fitness Center also closed in January on the east side of the interstate. However that appears to be under contract with a new owner. Last Monday the Marion city council approved a recommendation from the city's revolving loan committee for a $175,000 loan to Gabe Parker and his father James Parker, to purchase the gym and reopen it under the name Raw Fitness Center. The loan is part of a financial package being prepared by Farmers State Bank.

The move comes at the same time the city's new Hub Recreation Center hit its goal of 2,000 memberships. Apparently, it's time for Marion to get in shape up in the most literal sense possible.
Posted by Jon Musgrave at 7:47 PM 2 comments:

Pancake Holdings, LLC, of Chino Hills, Cal., an IHOP franchisee hasn't announced their expansion plans yet in the region, but we now know where two of their new restaurants will be locating.

The site's been connected with rumored restaurants for the last few years, including Olive Gardens at one point, but this is the first time a restaurant has been publicly announced. It follows the announcement late last year of a new Gander Mountain opening behind Menards.

Molly Parker of the this morning's Southern Illinoisan has the story on the new Carbondale location IHOP is eying.

Both Gary Williams, Carbondale's assistant city manager for economic development, and Hiren Patel whose MK Lodging LLC owns the UniCity Inn, confirmed that the troubled motel property will be torn down and replaced not only with an IHOP, but a second "3,000 square feet of space for another 'fast-casual' themed restaurant and 10,000 square feet of retail." Patel said he finalized the deal Thursday.

Patel's company bought the former America's Best Inn next to Steak 'n Shake last February after it had been closed by the city for code violations. Although he invested thousands into it to reopen and re-brand it, he said after a month of contemplating, the best business decision was to sell rather than pour thousands more into it.

Although deals have supposedly been reached for both parcels no deeds have been filed as of yet. If Patel just signed the purchase agreement Thursday, it would still take a few more weeks for deeds to be prepared, signed and filed. Even with signed deeds it still takes time. When Gander Mountain bought its property last Nov. 13, they didn't file the deeds and other documents for three weeks until Dec. 5.

Up until last fall the nearest IHOP restaurants were in the St. Louis area and Paducah, Ky. A new franchisee, Apple Investor Group, opened an IHOP in Cape Girardeau last October in the former Pasta House restaurant that closed last May.

The new Carbondale, and most likely Marion IHOPs will be new construction and will be among the first to feature the chain's new restaurant design.

Butler told Parker that as far as he’s aware, “there’s not been any change” in the Marion plans. “They told me they were looking at several locations in Southern Illinois.” 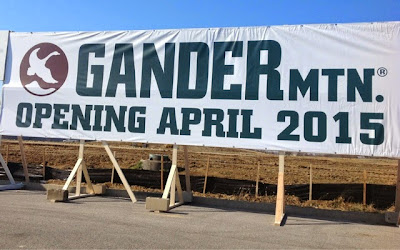 It's been a few weeks since Gander Mountain announced plans for a new Marion store, and we're now getting more details about the deal.

At the time, they announced it would be a 52,000 sq. ft. store employing up to 100 associates, of whom about a quarter would be full-time employees. The building will be built behind Menard's on a 4.824-acre lot carved out of the southeast corner of the vacant land located there owned by Marion Heights, LLC, the original developers of The Hill.

Officials declined to say at the time how much they paid for the land. However they finally filed the deed and other paperwork with the county last Friday. They paid $1,470,896 for the 210,128 sq. ft. of property, which if those numbers seem hard to fathom that's okay. The price was $7/sq. ft., less than half the $15/sq. ft., the price property has been selling on Halfway Road.

Realty Income Properties 4, LLC, a Delaware corporation based in Escondido, California, took possession of the property on Nov. 13, which they will apparently lease to Gander Mountain.

Comparatively speaking the price seems low, but in real estate development, that's the benefit of getting in on the ground floor so to speak. Gander Mountain sets the stage for the first new major commercial development in Marion since the recession, not only do they get a cheaper price, they also get to set the rules for further development.

Like most major retailers they requested, and received, deed restrictions on other future development on The Hill. While there are a variety of rules, the key one prohibits any key competitors:

... no portion of the Restricted Property may be used by Academy Sports and Outdoors, Cabela's, Bass Pro Shops, Dick's Sporting Goods (including Field and Stream), Scheels, Sportsman's Warehouse and any owned or controlled affiliate of the foregoing companies (collected the "Specific Competitors").

There's nothing sinister about this, as those stores, particularly the larger ones, would require the same restrictions if they were the first to locate here. As to department stores such as Walmart, they would be allowed but only if they kept their hunting/fishing/camping sections to less than 10,000 sq. ft.

The interesting part, particularly as it relates to the future of the STAR Bonds project, is that these restrictions aren't just for the adjoining property behind Menard's, but for all of Marion Heights' land on either side of Interstate 57.

Cabela's and Bass Pro Shops are two of a very small number of retailers that would qualify as a destination retailer for the STAR Bonds. There needs to be at least one of those involved before the STAR Bonds incentives could even be activated.

Does this signal the end of the effort to use the STAR Bonds legislation, or do the developers have something else up their sleeve? The development west of Kansas City, on which the legislation is based, utilizes another big retailer, Nebraska Furniture Mart. Although the former developers of the STAR Bonds district were trying to secure them, it's not clear if they had any interest as they only have two locations in the entire country.

The 38 or so acres left north of Menards remains in the STAR Bonds District awaiting the arrival of additional retailers or other developments. But back to Gander Mountain, the chain has been aggressively opening new, larger stores around the country. Marion appears to fit in that trend.

As part of the deal, we'll see more roadwork take place on The Hill. The day before they signed the deed, Marion Heights LLC dedicated Home Run Drive will be a new street that runs behind Menard's. It will connect Blue Heron Drive which runs along the interstate on the east, to Miners Drive which runs between Rent One Stadium and Menards. Down the road we'll also see the development of Stadium View Drive on the north side of the development and Miners Drive be extended north as well.

According to the sign out on the property, Gander Mountain expects to open sometime in April 2015.
Posted by Jon Musgrave at 6:02 PM No comments: