Don Gasaway just sent me the March outdoors news release for the bureau. It's got a great wrap-up of the local fishing opportunities for kids, especially great places where parents can take their children out for some bank-side fishing.

I've posted the column online at the Williamson County Tourism Bureau's website on the "News" page.
Posted by Jon Musgrave at 2:09 PM No comments:

Meetings have kept me from digging through the Gov. Rod Blagojevich's budget address earlier today, but we just received word from our friends in the Illinois Council of Convention and Visitors Bureaus (ICCVB) that state tourism funding proposed for FY09 will be the same level as this year.

Last year the governor proposed keeping funding levels the same as they had been for the previous two years, but the legislature added a 10 percent boost to the funding line items for local and regional tourism line items.

Here in Williamson County our state grant covers about 20 percent of our budget with most of the remaining funding coming for the local two percent bed tax.
Posted by Jon Musgrave at 3:14 PM No comments:

Although the final touches are still being made to the governor’s latest spending proposal, officials acknowledge they’ve considered imposing entrance fees at state parks as a way to balance the budget in tough financial times.

Details of what those fees might be were not available Monday and it’s not clear whether they would affect users of all of the state’s more than 100 state parks, forests and natural areas, most of which are located in downstate Illinois.

That may not actually be a bad thing, depending on the details.

Our system of state parks and historic sites are in crisis. Staffing levels at the various sites are at the lowest levels in decades. The Historic Sites Division of the Illinois Historic Preservation Agency has lost around 40 percent of its staff in the last six or seven years. A number of sites are simply mothballed and barricaded off from the public.

I understand the desire of keeping free admissions so that everyone can participate regardless of income, but it's becoming increasingly clear that free access equals no access when there's no money.

In Southern Illinois in the counties along the Ohio River there are five IHPA sites and absolutely no state employees.

The Department of Natural Resources faces similar struggles with state parks though not as severe.

Like the current proposals from the U.S. Forest Service for fees on the Shawnee National Forest it's not the overall concept that's worrisome, it will be in the details.

I made this argument a decade ago and have repeated it ever since now through three governors: It's ridiculous to take a site such as the Old Slave House (which was once privately operated with admissions) and keep it closed because there's no money for staffing yet while there's enough interest to draw large crowds that would pay to enter the facility.

The same admission price wouldn't work for all sites. A market driven approach based on interest and operating costs much like California's approach should be used. There it costs much more to visit major sites such as the 115-room Hearst Castle ($20 to $30 for adults depending on the tour and the season) than it does to visit the Gold Rush museum at Sutter's Fort historic site ($4 for adults).

In Illinois there could be one price for Lincoln sites in Springfield, or one ticket for parks and sites in other tightly knit areas.

If the governor moves forward with this it's also time to look at merging the Historic Sites Division of IHPA with the Division of Land Management in DNR as well as the state museums into one site-based agency.

This may be brought about due to budgetary constraints, but there's larger problems out there that could be solved at this time if a big picture approach was taken.

Maybe we'll be surprised Wednesday. I just hope the issues of parks and historic sites will finally be addressed.
Posted by Jon Musgrave at 11:29 PM No comments: 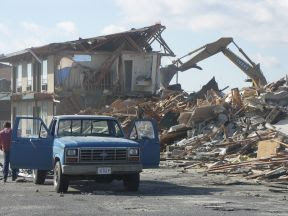 Crews working for Zeller Construction demolished the back wing of America’s Best Inns this morning to make way for a new 66-room Country Inn & Suites hotel set to open later this fall.

"We hope to pour the footings the week after next. I want to be open no later than the middle of October," stated Jim Zeller in a news release this afternoon. He's the owner of the construction company and the new hotel along with his wife Kellie.

Zeller purchased the property located along Halfway Road and immediately south of 17th Street Bar & Grill last fall from the owners of the America’s Best Inns motel. The location will allow motorists easy access from the new interstate interchange now under construction north of Route 13. 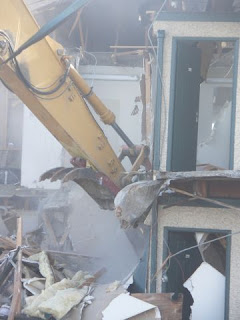 The new Marion project will be Zeller's second entry into the hospitality industry. He built the 59-room Fairgrounds Inn in DuQuoin next to the state fairgrounds that opened in June 2006.

"I'm excited about this thing. I’m ready to go," he told me.

The new Country Inn & Suites will include a pool, hot tub, continental breakfast, a small conference room as well as an exercise room.

Corporate officials with the chain approved Zeller’s franchise application today. Zeller’s plans also include a second phase of 40 or more rooms to be built later in 2009 if needed. DART Design of Marion is the architectural firm handling the design. Zeller Construction will oversee the building phase.

With its location in Marion’s original tax increment financing district the $5 million project is eligible for some TIF incentives from the city. An application for a redevelopment agreement with the city has been filed.

The Country Inn & Suites hotel chain is owned by Carlson. According to the company website, it's an international mid-scale lodging chain with more than 380 locations worldwide founded in 1987. Each location features "residential architecture and home-like interior design with highlights that include hardwood flooring, lobby fireplace and front porch."

Today’s announcement of a new Country Inn & Suites hotel brings the number of lodging establishments either open or under development in the county to 28. Based on current plans it appears that there will be a net gain of 18 rooms to the county’s lodging inventory by the time the hotel is open.

By then we should have around 1,285 rooms or cabins available to tourists here in Williamson County. That figure also includes seven additional rooms or cabins added by three other smaller facilities.

The latest figures released by the Illinois Bureau of Tourism last summer showed the economic impact of travelers in Williamson County to be more than $90 million in 2006, up 7.4 percent from 2005. Those expenditures by tourists also added $4.9 million to state coffers and just over $2 million in local tax receipts.

Meanwhile we should also see the opening of another bed and breakfast later this spring in Hurst.

Winegeese Inn, owned by Tom and Sharon Lynch, will include three rooms for tourists. Later the couple will open the adjoining business, Celtic Vineyards, which will be the county’s first modern-era winery.

Other new lodging developments include three additional rooms now under renovation at Mary’s Bed and Breakfast in Herrin which opened last fall with one room, and a new cabin now under construction at Devil’s Kitchen Cabins near Devil’s Kitchen Lake.
Posted by Jon Musgrave at 3:30 PM No comments:

Federal budget cuts will slash programs and services this year at Rend Lake, according to a news released issued last week.

The cuts are part of a region-wide series of cuts at Rend Lake, Carlyle Lake and Shelbyville Lake in Illinois as well as Mark Twain Lake in Missouri.

The following are impacted areas at Rend Lake:

The Rend Lake Visitor Center’s days of operation will be Saturday and Sunday only, from April 4 – May 18 and August 17 – October 26, 2008. Beginning May 18 and continuing thru August 17 the Visitor Center will be open Friday, Saturday, and Sunday. Hours of operation will be from 10:00 a.m. – 5:00 p.m. There will be no Environmental Science Series or Sunset Series of Programs (Saturday educational programs and Saturday evening musical programs) scheduled for the Visitor Center during the 2008 recreation season.

Persons having camping reservations at areas that are impacted by these park closures will be notified by the National Recreation Reservation Service regarding the reservation cancellations and a refund will be issued for fees paid.

The U.S. Army Corps of Engineers staff at Rend Lake is available to aid you in understanding the necessary operational changes and to assist you in finding an alternate area for your event. Contact the Rend Lake Project Office by phone at 618-724-2493 or by email at rendinfo@usace.army.mil. Information concerning facility opening/closing schedules is posted on the Corps of Engineers, Rend Lake web site at www.mvs.usace.army.mil/rend.

Posted by Jon Musgrave at 9:53 AM No comments:

The 2nd Annual Southern Illinois Boat and Fishing Show was a success this past Super Bowl weekend. Based on our road counters we're estimating attendance at 8,925 which is up from the 7,200 last year.

We had a different mix of boat dealers and vendors this year with demand for space exceeding what we had available. The seminars were well attended and the kids flocked to hear Camo the Clown.

For the first time we had three wineries attending the event - Bella Terra Winery from the Tunnel Hill area, Pheasant Hollow Winery from Rend Lake and Shawnee Winery from Vienna.

The Youth Outdoor Education Foundation and the Williamson County Events Commission produced the event with the help of our show runner Ron Allen who did a great job as always.

We would also like to thank our sponsors Marion Toyota and Budweiser.

The 2009 Southern Illinois Boat and Fishing Show will be held again Friday through Sunday, January 30 to February 1.

Next up for outdoor enthusiasts is the Egyptian Collector's Association's spring Hunting and Trade Show at the Pavilion on March 13-15.

UPDATE: We've decided to hold off on starting a new outdoors show this year, but we're looking at it for 2009.
Posted by Jon Musgrave at 11:21 AM No comments: