Well over $11 million in commercial projects have been permitted or broken ground this spring on Marion's west side along all three exits.

While city officials mentioned Culver's was looking at Marion last month, owners of the new restaurant took out a building permit on June 1 for their new 4,473 sq. ft. restaurant at 2607 Blue Heron Drive, immediately east of the IHOP now under construction. It's valued at $1,450,000. However as Wednesday they had not filed a deed for the lot.

Culver's becomes the fourth restaurant under construction (or at least about to be) in Marion.

Around the corner at 1309 Halfway Road just north of Krispy Kreme, Kidds Restaurants Inc.has begun construction of a new Jimmy John's. That project is just $200,000. They've had their permit since Feb. 5.

Down the road Marion's third Dairy Queen at 1300 Redco Rd. next to Marion Toyota is finally enclosed. This $850,000 building was permitted Feb. 3.

The restaurants are joined by two new convenience stores and a large car wash.

The city's fourth Huck's convenience store at 2700 W. Main St. near Exit 53 is going up quickly. Carmi-based Martin & Bayley took out a building permit the new $1,050,000 store at the corner of Halfway and Main on April 11.

Meyer Oil Co. which has recently expanded into deep Southern Illinois with locations in Harrisburg and Herrin took out a building permit on May 25 for a new Mach 1 convenience store at 2603 The Hill Ave. which is on the south side of the former Morgan Avenue backed up to the old shuttered Executive Inn. That one is a $2.8 million project.

The largest project this spring has been NLB Properties's new Finishline Carwash which will take the place of Ryan's Steakhouse. The old building is down and the new one going up is a $3.7 million project.

Smaller projects in the older sections of town include a $300,000 expansion to Erica's Doggie Stylez at 1012 W. Main St. for pet boarding and training and a $150,000 building at 505 E. College St. northeast of Family Video for a new fitness center.

According to the Southern Illinoisan, the city is looking at even more development particularly in the area of The Hill which would include additional restaurants (Buffalo Wild Wings is what's been mentioned the most), office and retail space as well as a $10 million hotel. In total $27 million in private investment is expected in a new TIF district being created south of The Hill Ave.

Other than the Mach 1 station most of those projects have not been identified and could be spread out over the next three years.
Posted by Jon Musgrave at 6:37 PM No comments:

Martin & Bayley has broken ground for a new Huck's Convenience Store at the site of the old Poe Skating Rink at 2700 W. Main St. at the intersection of Main and Halfway Road.

This will be the company's fourth store operating in Marion, and it's sixth location used in town.

The firm, named for the late founding partners, Bob Martin and Frank Bayley, dates to 1960 when they began operating supermarkets in small communities across Southern Illinois and eventually expanding into Kentucky and Tennessee. They opened the first Huck's convenience store in Grayville, Illinois, in 1974. Since 2001 the company has been employee owned.

Other than Huck's it was a slow month for building permits in the city. The other major projects include Brokton Webb's $340,000 4-plex at 909 E. Carter St. and Lee Webb's $250,000 project for storage units at 700 N. Main St. The remaining projects are for a double-wide mobile home and two garages.

Overall, the city approved permits totaling $1.783 million in the month of April.

It looks another development will be heading to that area, J. E. Mayer LLC, the corporate owner of the land where Marion Toyota Auto Body operates on Cree Drive, just purchased the vacant Lot 8 immediately to their west this Tuesday, May 3. They paid approximately $3/square foot, or $103,629 for the .79 acre lot on the northeast corner of Cree Drive and Halfway Road.

Posted by Jon Musgrave at 12:23 AM No comments: 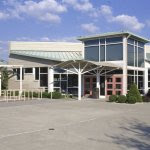 The director of the Illinois Department of Natural Resources says the Illinois State Museum could reopen in a matter of weeks if lawmakers approve Gov. Bruce Rauner's amendatory veto of Senate Bill 317 sent to the governor last December. The General Assembly passed the legislation requiring the governor to reopen and operate the museum and its branch sites at Dickson Mounds, Freeport, Rend Lake and Chicago.

The amendatory veto replaced the list of branch sites to reopen with the language, "branch sites determined by the Department of Natural Resources in collaboration with local units of government and other public and private entities."

That would mean the addition sites Southern Illinois Art & Artisans Center at Rend Lake wouldn't automatically reopen, just the Springfield one. Apparently it would require some local partnerships to guarantee the Southern Illinois facility's future.

Currently the non-profit group just operates the bookstore and handles a few research issues. This would be a major change for the entity, but one that has been needed for some time.

The governor's third change would deal with admission fees. The legislation authorized the department to charge a fee, but one set by administrative rule, a time-consuming process. Rauner's change would allow the agency director to not only set the fee, but also allow different fees for different classes of visitors, such as a cheaper rate for students or groups.


Rosenthal said no decision has been made about the size of the admission fees, but Rep. Tim Butler, R-Springfield, said he thought a fee of $5 for adults was reasonable. Rosenthal said that would put Illinois in line with surrounding states that charge admission fees to their state museums.

Rosenthal also said that going forward, the museum would work in partnership with private organizations to raise addition funds for the museum. He said there is no target amount for how much must be raised between the admission fees and private donations.

The museum and related facilities around the state closed in September because of the state’s budget crunch. However, unionized state employees there have remained on the job because of a pending lawsuit in St. Clair County challenging layoffs of state workers.

As part of the agreement to reopen the museum, Rosenthal said facilities in Chicago and Rend Lake would close — saving the state about $1 million.

Apparently there's been no progress about finding partnerships in Southern Illinois. That's a shame. It's time for the Rend Lake Conservancy District, DNR and Cedarhurst Center for the Arts in Mount Vernon to step up to the plate.