Unlike local tourism and convention bureaus funded primarily through a local bed taxes, the regional tourism development offices are funding almost entirely through a state grant. Late payments over the last few years has caused the office to repeatedly borrow funds from local banks to make payroll at the start of the each fiscal year.

That in itself has become a problem because the state has ruled the tourism offices can't use state funds to make interest payments to the bank. Without a source of revenue to make such payments, the amount has simply been recycled through the bank accounts year after year.

The regional tourism office represents 22 counties in Southern Illinois. It's mission is unknown, or at least, disputed, depending on the source, especially in its relationship with the local bureaus and counties that don't have bureaus.

For the last few years the office's chief success has been maintaining the regional tourism website at www.adventureillinois.com (and previously also at IllinoisAdventure.com), and the annual regional tourism guide. When I was there we also assisted local tourism developers on their projects.

In its decade or so existence, the office has had five permanent and at least three or four interim executive directors, mostly due to the funding issue and the lack of clear mission - whether it should truly serve all 22 counties, or just those without certified tourism bureaus.

I only met my successor at SITDO once in person and a few other times by phone or e-mail. I wish him well in his future endeavors.

SITDO took the place of the former membership-based Southern Illinois Tourism Council which in turn grew out of the old Region 9 Tourism Council that existed back in the 1960s.

The move to lay off its staff comes after layoffs in the state's tourism information centers along the interstates.
Posted by Jon Musgrave at 3:21 PM No comments:

Bruce Holland, owner of Millennium Development LLC, has told the Southern Illinoisan that he expects to launch the process creating the state's first STAR (sales tax and revenue) Bond District in September.

Meanwhile, the city is working with Millennium Development LLC, the company behind the destination development, and the state on the establishment of the STAR Bond district, developer Bruce Holland said.

"It's part of the process," Holland said. "We're working with the city and the Department of Revenue to determine the actual boundaries and demographics of what goes in the district. Once that is done, we'll be closer to being able to say who (what businesses) we are working with for the actual development."

Mayor Butler told the paper that developers have already optioned nearly 400 acres and are still working on two or three other land owners. Based on what I'm hearing in the real estate industry, it looks like the district will stretch from the edge of Rent One Park east across the interstate almost to, if not right on, Route 37 north of the cemeteries.

Butler also hinted at two or three other businesses not related to Holland's development who had put their plans on hold due to the recession are back showing renewed interest in the city.

He provided no hints, but past businesses interested included two new hotels (one a new Holiday Inn Express for the lot next to MidCountry Bank) and a major chain restaurant, which was all but named as a certain Italian eatery which has danced around with the city since the Illinois Centre Mall underwent construction 20 years ago.

I don't know for sure what Butler was referencing, it could be these, or it could be some of the other larger businesses and industries looking at the city prior to the economic downturn. Either way it's a winner for the region.

In order to establish the district for which public hearings will be held, the developers have to come up with a master plan that includes at least one destination user (a large specialty retailer) and one entertainment user (theme park or other entertainment complex).

Once the city approves the district, it then goes to the Illinois Department of Revenue for approval.

The Southern's article is already online and should be in tomorrow's print edition.
Posted by Jon Musgrave at 5:35 PM No comments:

It's being called a cost-saving move, but visitors wanting tourism information can no longer get it at state rest areas.

All personnel have been laid off due to the state's growing budget problem.

The Chicago Tribune is the latest with the story.

The move to cut tourism spending will likely only hurt the state. Past studies show for every dollar spent by the state for tourism generates more than $8 back for the general revenue fund itself, not to mention the jobs it creates.

The move for the current fiscal year doesn't come as a surprise. As of late June, the end of the last fiscal year the state owed around $1.5 million to the non-profit operator of the welcome centers. Layoffs were going to happen one way or another.
Posted by Jon Musgrave at 4:54 PM No comments:

A spew is brewing in Carbondale after the new owner of the Hundley House bed and breakfast asked the city for permission to sell alcohol to his guests.

Don Jones opened the inn in May. Now he wants to add a liquor license to his amenities. Currently the city code allows for licenses to be issued to hotels and motels if they have 25 rooms or more. Bed and breakfast inns max out at just five rooms under Illinois law.

By definition bed and breakfast inns provide breakfast where the issue of liquor doesn't usually come up. However, some offer dinner or an evening cocktail. Those that do either require guests to bring their own bottle of wine for dinner, or provide the drinks for free.

According to the Southern Illinoisan the city council members didn't have a problem with proposal in general. Instead, they tabled it until a future meeting for issues with the language to be worked out.

The fight is coming a competitor, Paul Lewers, of the Train Inn Bed & Breakfast, (and not the Trail Inn as referenced in the article).

"It's kind of like the Wal-Martization of America where everyone has to come up with a way to do everything," said Paul Lewers, owner of Trail-Inn Bed and Breakfast. "It smacks of some kind of need to wrangle every last dollar out of your customer. It's something I would never want."

Lewers along with fellow operator Linda Goforth of the long-running Barton House B & B are fine in their decision not to offer alcohol if such an ordinance passes, whether it be on moral or business grounds, but Lewers is on much shakier ground when he takes a stand to oppose a license for a competitor who does want that option.

Many of the guests in the various inns and cabins in the area come for the wineries. The idea of being able to sell a bottle of local wine, or that matter a bottle of the local brew from the Big Muddy Brewing Co. over in Murphysboro, is an amenity many guests will want.

The council discussed the issue in June. The proposed ordinance
would set a $100 fee for the new license, down from the $2,250 for a hotel.

In other bed and breakfast inn news, the Marion Daily Republican has a nice feature on the Olde Squat Inn in Williamson County. The inn is northeast of Marion, as opposed to northwest as stated in the article.
Posted by Jon Musgrave at 4:32 PM No comments: 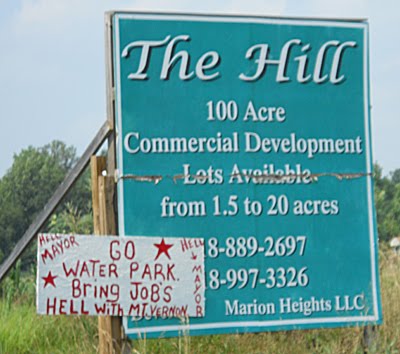 A few weeks ago someone placed the above hand-painted sign at the intersection of North Carbon Street and Morgan Avenue in Marion where the new Millennium Development is set to expand The Hill into a major retail and tourist destination center.

The sign surfaced just after the first round of heavy news coverage of Mount Vernon's opposition to SB 2093 that would create a STAR Bonds district in Marion.

I thought at the time Mount Vernon officials were going above and beyond making their point and were to the point of digging their own grave, shooting themselves in the foot, etc., (insert your own favorite cliche here).

The last thing the King City needs is to stir up a boycott - something I've heard mentioned more than once or twice. Such a move would only hurt Southern Illinois.
Posted by Jon Musgrave at 11:30 PM 1 comment:

They haven't made an official announcement yet and the sign above the door still reads the Great American Chop House, but Carbondale's Fujiyama Japanese Steak House is going to be the latest in a line of Carbondale eateries expanding into Marion.

The bar is out and the table grills have been installed in the former Ruby Tuesday restaurant at the east end of the Illinois Centre Mall in Marion. Fujiyama will take the place of the short-lived Great American Chop House.

A new sign on the front side of the mall has already been installed.
Posted by Jon Musgrave at 11:16 PM No comments: