It's renewal time for a 45-year-old bank building at the corner of Carbon and Deyoung Streets in Marion.
Constructed at a cost of just $100,000 for its original 2,000 square feet the former Fifth Third Bank and original King City Federal Savings & Loan building is now undergoing a $1.5 million face-lift and expansion.

Eldorado-based Legence Bank filed their application for a building permit with the city on April 5 and began excavation work outside last week. Legence entered the Marion market last year with their purchase of MidCountry Bank's remaining Southern Illinois operations.

Mount Vernon-based King City Federal bought the property at 1133 N. Carbon St. in May 1974 from Chevron Oil Co. They broke ground the following month and opened that December with Clarke E. Deacon as branch manager.

Through mergers and expansions the last financial institution on the site was Fifth Third Bank which eventually closed the facility in favor of their new one across from Heartland Regional Medical Center.

The bank building on the corner is one a handful of buildings on that stretch of North Carbon Street to survive the 1982 tornado relatively intact.

Legence isn’t remodeling the facility any more as first described when they announced plans last year  but doing a complete rebuild. Since the picture above was taken they’ve completely demolished the 1970s structure. 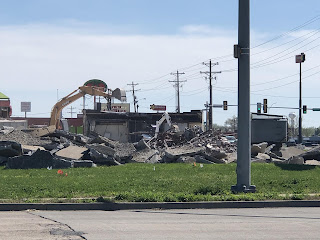 Posted by Jon Musgrave at 1:13 PM No comments: