Progress Made Toward Little Egypt Oasis

The drive to develop the Little Egypt Oasis on top of Interstate 57 at West Frankfort continues through the planning and engineering phases.

Overpass owner and developer Scott Williams sent out an update earlier this week. On Monday he met with representatives of both the Illinois Department of Transportation as well as the Federal High Administration. The meeting "went well," he reported.

The conceptual approval, if all goes well, will take about 4 to 6 months and the study that will follow will take 12 to 18 months. So the project is moving forward but still has a long way to go.

The moves comes after the initial kickoff meeting for the Access Justification Report last November.

The Little Egypt Oasis would make major changes in the interstate interchange and open up hundreds of acres for development. The key point of the plan would include using the railroad overpass as the site of the main development. An early stage would be building of a truck stop on the west side of the highway.
Posted by Jon Musgrave at 9:29 AM No comments: 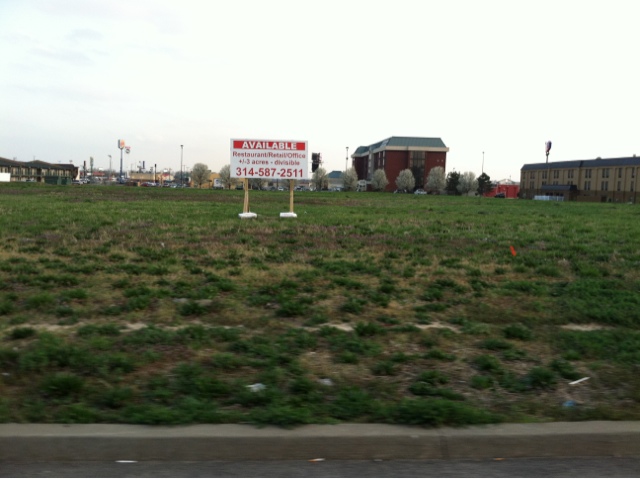 With the Drury chain focusing on a major new project in Mount Vernon the company took the rare step of actually placing some of their undeveloped acreage for sale. The chain has long been known for sitting on property until the time is right for development.

Recently in Marion, they turned over part of their land for the new Panera's and was in negotiation with America's Best Inns to buy and demolish that property for another well-known chain restaurant. That deal did not materialize.

Now they've placed three acres up for sale located behind their hotel and Panera's that fronts 17th Street (Morgan Ave.), and it looks like there's another developer eyeing it for a new hotel and apartments that would cater to professionals and workers who need longer-term stays.

As of last week no building permits had been issued with the city.

Drury's three acres would make a good fit for such a development. There are nine restuarants in that block or just across the streets that surround it, as well as a liquor store. Gold's Gym is just a short walk away as is Rent One Park up on The Hill.

Meanwhile work progresses in Mount Vernon for Drury Inn's new $22 million development on the northeast side of the main interstate interchange. Drury has knocked down its long-time three-story inn, a gas station next door, and as of late last month when the picture below was taken, was in the process of knocking down the Thrifty Inn and the former Best Western Inn, which had been closed for years. 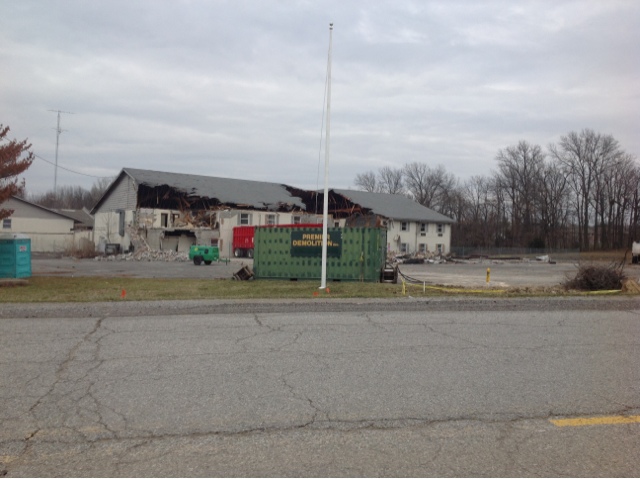 The old rooms wiped out will be replaced by a seven-story hotel similar to the built in the last few years at O'Fallon, Illinois. In addition the company will create space for two new restuarants yet to be publicly identified. Plans also call for additional retail space as well.

The old Best Western hotel was one of the two original major hotels in Mount Vernon after the opening of Interstate 57. Ralph Gray, brother of U.S. Rep. Ken Gray, and developer of the Gray Plaza motel chain, built the hotel in 1967-68 as a 101-room Ramada Inn.

Gray announced the $1.1 million project at the time he opened his new Ramada Inn in Marion. Both hotels were designed to be identical. While the Mount Vernon languished in recent decades hidden behind a row of pine trees planted on the Thrifty Inn property, the Marion hotel has survived as a budget motel under a variety of franchises.

The hotels originally included a cocktail lounge, coffee shop and a banquet room large enough for 150 people. An ornate curved staircase to the a second floor was a major feature in the lobbies. Each guest room included "piped-in-music, color television and air conditioning" and were "decorated in three color schemes, gold, green and blue," according to an article in the July 23, 1967, edition of the Southern Illinoisan.
Posted by Jon Musgrave at 3:06 PM 6 comments: